History, shame and memory: creating The Interpreter from Java 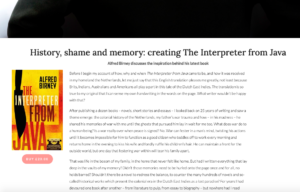 Before I begin my account of how, why and when The Interpreter from Java came to be, and how it was received in my homeland the Netherlands, let me just say that this English translation pleases me greatly, not least because Brits, Indians, Australians and Americans all play a part in this tale of the Dutch East Indies. The translation is so true to my original that I can sense my own handwriting in the words on the page. What writer wouldn’t be happy with that?

After publishing a dozen books – novels, short stories and essays – I looked back on 25 years of writing and saw a theme emerge: the colonial history of the Netherlands, my father’s war trauma and how – in his madness – he shared his memories of war with me until the ghosts that pursued him lay in wait for me too. What does war do to a human being? Is a war really over when peace is signed? No. War can fester in a man’s mind, twisting his actions until it becomes impossible for him to function as a good citizen who toddles off to work every morning and returns home in the evening to kiss his wife and fondly ruffle his children’s hair. He can maintain a front for the outside world, but one day that festering war within will tear his family apart.

That was life in the bosom of my family, in the home that never felt like home. But had I written everything that lay deep in the vaults of my memory? Didn’t those memories need to be hurled onto the page once and for all, no holds barred? Shouldn’t there be a novel to redress the balance, to counter the many hundreds of novels and so-called historical works which present the colonial era in the Dutch East Indies as a lost paradise? For years I had devoured one book after another – from literature to pulp, from essay to biography – but nowhere had I read anything that came close to what I wanted to write and to read. To hell with those historians, biographers, novelists, literary critics and publishers! I decided to set all literary conventions aside and start work on what I had always wanted to write, the book I had dreamed of writing since I was 21.

It took a while, partly because I wound up pursuing a career as a singer-songwriter. It was an injury to my left hand at the age of 30 that forced me to make something of my life by turning to the written word. My debut came in 1987, a novel in which I played tricks with time but was still very much bound by convention, awestruck by the towering literary giants who had gone before me: Kafka, Beckett, Duras and their peers. Twenty-five years later, I had my own experience as a writer to draw on and finally, without hesitation, I felt ready to confront the shamelessness of the Dutch elite, who for too long had swept aside the colonial war that the Netherlands waged in Indonesia. When The Interpreter from Java went on to win a prestigious Dutch literary prize in 2017, the momentum began to gather. My novel became a bestseller in the Netherlands and spoke to historians and writers in search of a different tone, a new perspective. To this day, that is the power of fiction: the power of an autonomous novelist to take up a task neglected by scholars.

I wrote The Interpreter from Java according to the principle of autofiction, a term introduced by French writer Serge Doubrovsky in 1977. A form that does away with the oppositions between reality and fiction, between autobiography and novel. I wanted my readers to experience a story in different keys. The reality is the book itself. By 2012, I had amassed a considerable personal archive. Interviews with my mother, recorded on cassette in May 1986. A stack of paper, complete with photographs – my father’s memories of his younger days in Surabaya. A wealth of stories and columns. Notes from my own travels in Indonesia. Initially I toyed with the idea of a chronological account, a story running from my father’s birth in 1925 until his death in 2005. But I needed someone to provide a second perspective: his eldest son Alan, my alter ego. I needed witnesses, like the mother figure. And ultimately I needed a composition. I opted for a polyphonic, achronological approach, bookended by sections in which the father figure is discussed but not present. Between these first and final sections come two sections in which the father speaks, detailing the horrors of war almost as if he were a robot, feeling nothing of what he describes. And then there is the middle section, the chapters closest to my heart, written from the perspective of a young boy whose life is warped by his father’s war-torn psyche. A boy whose family falls apart and who lives out his adolescence in institutions.

It was no easy task, as a writer and as a human being. I don’t mind admitting that, during the three years in which I sat drinking cola at my laptop, all but cut off from the outside world to complete a book that had been thirty years coming, there were times when I had to reach for tranquillisers. From the reactions I have received in the Netherlands, I understand it’s a book you want to put aside at times but that compels you to go on reading. I hope it’s a book you will enjoy. Oh and before I forget, there are a good few laughs in there too…
—

On September 3, 2020, the London-based publishing house ‘Head of Zeus‘ released ‘The Interpreter from Java’, translated by David Doherty: