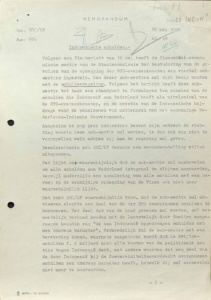 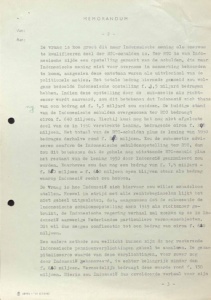 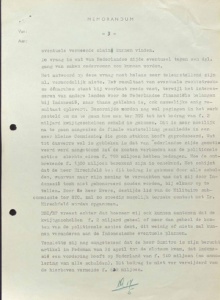 According to a Pia-message of 16 May, the financial-economic section of the State Committee has set up four subsections to study the consequences of the cancellation of the RTC agreements. One of these sub-sections will deal with the debt settlement. According to the report, this subsection has the task of formulating a position with regard to the debts Indonesia has to the Netherlands as a result of the RTC agreements, and the issue of the Indonesian contribution to the pensions of officials of the former Dutch East Indies government.

Since no indications are known about the direction in which this sub-section will work, it is therefore not yet possible to predict what advice it will give to the government.

Nonetheless, DBI / EF would like to express an assumption in this respect.

It seems unlikely that the sub-section will recommend to continue to fully accept all debts to the Netherlands, while on the other hand a cancellation of all debts with an appeal to the unilateral termination of the Finec does not seem very likely.

It is likely that DBI / EF will advise the sub-section to honor only part of the debt taken over by RTC. The part that will be rejected will presumably be related to the issue recently touched upon by Sumitro on “the indebtedness imposed on Indonesia”. Presumably the sub-section will come with a calculation, proving that · -the waived f. 2 billion does not cover all costs of the police actions against Indonesia, in other words that some of the debts taken over by Indonesia in the transfer of sovereignty are of an unfair nature, which they will no longer accept.

The question is how big this part of the RTC debts is to be regarded as undesirable according to Indonesian opinion. In Indonesia, RTC has drawn up a list of debts which, according to Indonesian opinion, should not be considered for take-over, since these had arisen as a consequence of the police actions. The total amount involved would, according to the Indonesian set-up, f. 3, 5 billion. If this attitude is accepted by the sub-section as a guideline, this would mean that Indonesia is currently claiming an amount of f. 1.5 billion would be disposed of. The current state of Indonesian debts acquired at RTC is approximately f. 640 million. In addition to this, the part of the loan granted in 1950, which has not yet been repaid, comes to the amount of approximately f. 240 million. The total of the RTC debts plus the loan of 1950 are therefore around f. 880 million. Would the sub-section advise according to the Indonesian debt set-up at RTC, this would mean that the entire outstanding RTC debt plus the remainder of the 1950 loan would be canceled by Indonesia. Above that, an amount of f. 1.5 billion – f. 880 million = f. 620 million remain open as an amount to which Indonesia would be entitled.

The question is how Indonesia would want to compensate for this. Although contrary to all principles of law, it does not seem entirely out of the question that, assuming that the sub-section uses the Indonesian debt arrangement in 1949 as a guideline, the Indonesian government will seek recourse to the Dutch private capital assets present in Indonesia. This means confiscation to an amount of approximately f. 620 million.

Another method might be to completely cancel the remaining Indonesian pension obligations. However, the capitalized value of these obligations, insofar as they have been honored by Indonesia, is significantly less than f. 620 million. Presumably this value is around f. 150 million. Indonesia could therefore not find sufficient narrative for its possible alleged claim.

The question is what, on the Dutch side, possibly against a dgl. course of business.

The answer to this question must unfortunately be very disappointing, presumably nothing. The result of any direct demarches has already been established in advance, while the interest of other countries in the Dutch financial interests in Indonesia, as has now been shown, hardly produces any results either. On the other hand, efforts are still being made to find out how, at RTC, up to the amount of f. 2 billion forgone debt has come. This is very difficult to verify since the final determination was made in a very small Commission that did not produce any documents. What has so far been shown is that the Dutch side demonstrated in a justified manner that the costs related to the police actions are only approx. 700 million. How the missing f. 1300 are alculatined is unknown. It seems that Mr Hirschfeld has reached this amount by adding up all debts, which in his opinion would be expected to be honored by Indonesia. By Mr. Evers, then member of the Military Subcommittee at RTC, will contact Dr. ir. Hirschfeld are included.

DBI / EF fears, however much we can show that the waived f. 2 billion wholly or more than entirely covers the costs of the police actions, this will have little or no effect on the Indonesian possible plans.

Finally, it should be noted that Mr. Sumitro concluded that his infamous article in Pedoman of 24 April came to the conclusion that Indonesia has a claim against the Netherlands of f. 540 million (after canceling all debts). This amount is not far from the aforementioned f. 620 million.
—
For more archival documents see: https://majority-perspective.blogspot.com/2019/05/presentation-foundation-majority.html?m=1