These two presentations were part of the public discussion:”Rotterdam History of Slavery and Colonialism,” organized by Wayne Modest, director of the Research Center for Material Culture. Read more… Texts are translated from Dutch. 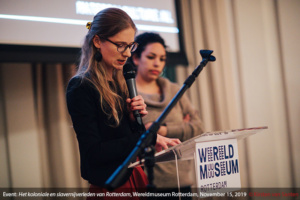 “I was 17 when I moved here to study art school in this city. At that time I had no idea of ​​the colonial past of the Netherlands. And as a white person, I had the privilege not having to think about this either. Rotterdam has been my hometown since then. Thus, I speak here first of all as a Rotterdammer. But I also speak here as a historian, as a photographer who in the past 10 years has studied the colonial past of the Netherlands and in particular the colonial occupation of Indonesia.

I learned my lessons. Last night the Dutch authorities arrested two human rights activists, with brutal violence. Two members of the Majority Perspective Foundation are now, as we speak, in a police cell. While we are chatting here about inclusiveness and multi-perspectivity, the State (the same government from which you receive money) is detaining people.

Fifteen years after I first moved here a lot has changed. I changed too. I am not that shy person from the countryside (Province of Zeeland) anymore, who found everyone in this city so direct and outspoken and who had difficulty with giving my opinion. I am more outspoken and more self-assured than ever, however I now see that there are limits to how critical you can be. I have noticed that as soon as you really become fundamentally critical of how this system works, addressing the continuity of colonial-racist policies (calling out people who play a role in it), doors will close.

In our society, two dominate groups are allowed to fight each other. Left versus right. All with the firm conviction that if the other person would think like them, the problems would be solved. Polarization is a word with a negative connotation. Because we must “polder” [negotiate], we have to agree. Uniform thinking. Considering the pros and cons of colonial human rights violations. But is polarization really such an unpleasant phenomenon for everyone? Is division really as undesirable as they pretend? In my opinion, polarization suits the current power structure very well.

I have to explain this. I think we should consider the phenomenon of divide and rule more, divide and conquer, an old tactic by which a smaller party can dominate larger groups of people, countries, societies. A tactic that the VOC used in Asia as they were a relatively small player that dominated larger areas.

Racism is the most common example of colonial divide and rule. Through racism a small minority of Western Europeans managed to suppress the non-white majority on this planet based on racial lies. The colonized peoples were also set up against each other.

My point is that I still see this old tactic being applied today. With the sole purpose of maintaining the white patriarchal structure. I see this mechanism working in the way investigations on the colonial past are outlined and conducted. I see appropriation, tokenism, exclusion and criminalization of non-white critics who were the first to place the colonial past on the agenda.

This is not only the case here in Rotterdam, this is also the case with the large Indonesia-research that KITLV is conducting as well. I am referring in particular to how critics have been treated. Regarding the major Indonesia investigation, two Indonesians Jeffry Pondaag (present here tonight, over there) and the 93-year-old Mrs. Pattipilohy, wrote a critical open letter. Yet so far, the media remains totally silent about this.

I see racism in how non-white people are excluded, criminalized or ignored while they are the ones that put colonial issues on the agenda. Their role is reduced to a kind of passive sources, after which the white authorities take over and change it into a comfortable, not too radical story. With divide and rule, there is always a party that benefits from the mutual quarrels and debates in society. Typically, they will always pretend that they have nothing to do with polarization. As if they are not part of it. So they can take up the paternalistic role of neutral mediator. Who are they today? Which people are working for our institutional bodies? Who are responsible for maintaining institutional racism? I believe that this is not about right-wing VVD people or PVV supporters.

The colonial past is receiving more attention than ever. The current exhibition “Dossier Indië” (The Dutch East Indies Files), this research in Rotterdam, but also the national Indonesia investigation, are examples of this. If you consider yourself leftist, of course you find this a good development. You will say that we have to face the past, that this history must be taught. You will use words as inclusiveness, diversity and multi-vocality.

In other words: the colonial past is trendy, saying that terrible things have happened in the past is not at all a controversial statement. In fact, if you choose the right approach, you can even make money with the colonial past. Numerous government subsidies are currently spent on research, exhibitions, books, theater shows, radio and TV reports, you name it.

And yes, not surprisingly: non-leftist people will have the opposite opinion. They go to Facebook and write under the announcement of this event, I quote: “What a nonsense. We are going after Amsterdam. I do not want to be part of this. Bye-bye!” I already know how participating researchers in this Rotterdam study will react to these statements. How unwise of these people, putting their heads in the sand. Refusing to acknowledge the past. Yet, how self-critical it is to point fingers at others while you enjoy a generous salary, successfully keeping everyone who questions your position outside the door. My point is: exclusion is also supported by left-progressives who use words like “inclusiveness” and “diversity”.

I repeat: a human rights activist with Javanese-Torajan roots who planned to join this discussion tonight is now in a police cell. The irony is that when human rights activists are arrested in Indonesia, the Netherlands is always the first to firmly condemn such arrests. Where is the public outrage now Look at us chatting, here, in this colonial building about multi-perspectivity while the reality is that his perspective and that of many other critical people of color, is silenced, even with violence. How can I still have faith in research like this? As a Rotterdammer I say: not in my name.”
— 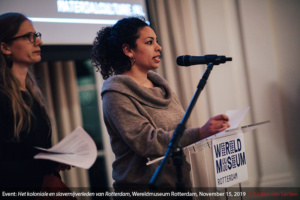 “Unlike Marjolein, I was born here in Rotterdam and, as you can see, I am a person of color. Yet I, too, grew up with the idea of the Netherlands as a free and tolerant country.

The reason why is a mystery to me, since I remember being scared as a child when I saw skinheads walking down the street. And that swastikas tagged on walls reminded me that there were people who hated non-white people. That too scared me. Because, after all, I was a person of color. Just like my brother. My father even has a darker skin tone. Did people also hate us?

Skinheads and swastikas are extreme examples, but racist remarks, whether or not disguised as “jokes,” were a consistent part of birthday parties of white families. Those jokes were, obviously never about me. I was considered ‘ok’. It was always about others. Therefore, it was very inappropriate to say anything about it. After all, they didn’t mean it that way, right? In addition, there was the promise of the Netherlands that ‘real racism’ would never happen again. As a child you are of course still protected against certain information. At the time I never heard about institutional racism and the consequences of it.

Yet, although unaware of those structures, I soon learned to behave as white as possible. On an unconscious level I knew, for example, that it worked in my favour to speak Dutch without accent. Over the years I’ve developed a Rotterdam accent. However, my pronunciation reveals that I have a non-Western background. And when people hear that my mother is from Limburg, I see relief in their eyes. For a white Dutch person it might not be an advantage, but for a non-white Dutch person it is: it makes you slightly more Dutch. In short, making myself as white as possible gave me privileges.

On the other hand, it sometimes was an advantage that my skin is not white. For example, I heard that there was a picture of me in the program booklet of a foundation, because of my non-white skin color. This foundation wanted to show ‘diversity’, although it is an extremely white organization.

It has been a process to become aware of my adaptation to, and internalization of, Dutch racist structures. From this background I want to respond to the questions which are the subject of this evening. These questions are mainly about the usefulness of multivocality and multi-perspectivity.

When I read these questions, I find it hard to think about answers, because there is another question that comes to mind, namely: Why do we so badly want to adjust racist and colonial structures, why can’t we just stop? Adding a bit of color or having other voices heard pro forma (multivocality and multi-perspectivity) makes a colonial institution, such as the KITLV or museum, such as the Wereldmuseum, not any less colonial.

I therefore argue that multivocality and multi-perspectivity are very problematic. Marjolein has just mentioned the striking example of the exhibition “Dossier Indië”. During the opening, our minister of Education, Culture and Science, Ingrid van Engelshoven, argued that history must be in balance. For her, a balanced history means, I quote: ‘I want to read why Jan Pieterszoon Coen stands heroically on a pedestal in Hoorn, but also why he is called the butcher of Banda.’ Why?! I wonder then. Why should we hear about the so-called heroic deeds of a man who is responsible of thousands of deaths? Murders that have been committed purely to strengthen the trading position of the Netherlands.

Do we also want to admire Hitler’s leadership qualities? No, when you say that, you are in big trouble. Then why can such remarks be made about VOC criminals? And why do people even expect to get an applause for these kind of remarks? By talking about ‘the black page’ of our history, the illusion of our country as reflective and conscience-stricken nation is maintained. The consequence of this is not just that the colonial and racist structures remain unaffected, Even worse: it strengthens the power position of the established order.

Marjolein already mentioned the arrests of last night. Concerning one board member and one sympathizer of the Majority Perspective Foundation. This foundation addresses systematic oppression and fights against, among other things, the racist arrival of Sinterklaas. It is the third time that members of this foundation have been preventively detained in order to prevent them from demonstrating during the entry of Sinterklaas. One of the two people taken into custody was arrested in his own house, with violence and pepper spray.