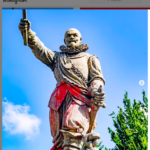 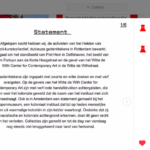 The memorials are wrapped with black and white cloths and doused in paint. Red handprints have been left on the facades of the Witte de With Center for Contemporary Art. They represent the colonial violence that the name of the institute carries with it. An additional statement has been made in Amsterdam at the Tropenmuseum, a colonial institute that still safeguards human remains from former colonies in its vaults. Although they recognize their racist and colonial background, this does no justice to the past. Collections were stolen and have not been returned to their countries of origin to this day.

Building on the now international Black Lives Matter movement and departing from the same anti-racist and decolonial perspective, we use these actions to criticize the glorification of Dutch colonialism and the martyrdom of Pim Fortuyn. We place the statues in their right context and demand that wrongful ‘heroes’ be condemned. We criticize the collective memory of Dutch history where murderers, exploiters and fascist politicians are monuments. In the case of the Tropenmuseum, it is high time that the museum return colonial loot to its rightful owners, instead of playing symbol politics.

Following the murder of George Floyd and the protests against police brutality in the United States, solidarity protests took place in the Netherlands last week. The murder of George Floyd deeply affected black Dutch people. In the Netherlands too, police officers wash their hands in innocence, but according to the figures of Control Alt Delete, an organization that protests ethnic profiling and disproportionately police violence, 41 people have died due to police brutality since 2016. Of these, 43 percent were color and 18 percent were white. The ethnicity of the remaining 39 percent is not specified. Disproportionate police brutality against people of color is yet another symptom of the institutional racism that Western governments sweep under the rug.

Despite numbers like these, the recent discrimination scandal within the Dutch Tax Authority, and the normalization of increasingly racist and nationalistic language use within and outside of politics, the denial of institutional racism in the Netherlands still seems to be the status quo. As expected, the solidarity protests against anti-black violence rubbed the vast majority of white Netherlands the wrong way. The danger of corona contamination was put forth as the infallible counterargument, while people freely frequented beaches, parks and sidewalk cafes in the same week. Thierry Baudet (party chairman of the Forum for Democracy) and Joost Eerdmans (party leader of Liveable Rotterdam), for example, openly violated the 6-foot measure without reproach. Mayor Femke Halsema’s choice to continue the Black Lives Matter protest on Amsterdam’s Dam Square has meanwhile led to a vote of no confidence.

Despite enforcement of COVID-19 rules, the early termination of the Rotterdam protest came as no surprise: after all, those present expressed solidarity in their disappointment and anger towards institutions that structurally discriminate. Protesting police and government and then having your protest curtailed by exactly those institutions is a bitter pill to swallow. Mayor Ahmed Aboutaleb assigned the organizers an inadequate small part of the Erasmus Bridge, despite the large turnout in Amsterdam and The Hague. Enforcement of COVID-19 measure would have been easier if the use of driving lanes in the area had been permitted ahead of time.

The wearing of masks and gloves turned out not to be sufficient. Not being able to keep a 6-foot distance in the limited space was, according to mayor and police, justification to stop the demonstration fifteen minutes early. Once again, Black Dutch people, Dutch people of color and white Dutch allies were excluded that evening.

Never Heroes art collective includes black people, non-black people of color and white Dutch people. Inspired by the Black Lives Matter protests in the United States, the United Kingdom and Belgium, we have decided to join forces against homegrown colonial and nationalist glorification.

The fact that the Netherlands has been convicted several times for war crimes in Indonesia has not detracted from the honor colonial figures such as Witte de With and Piet Hein receive, as evidenced by the many dubious monuments in this country. The cover ups by the Netherlands Institute of Military History, the Institute for War, Holocaust and Genocide Studies, and the Royal Netherlands Institute of Southeast Asian and Caribbean Studies in the research into Dutch colonial violence and exploitation in Indonesia, throws salt in the wounds of the Indonesian community. The study is said to be concerned with ‘extreme’ violence between 1945 and 1950. Colonial violence outside of that period was not mentioned.

Structural discrimination against minority groups has the same source, which is why it is important to show solidarity. Together we are stronger. The sexual freedoms that contemporary Dutch politics is so proud of have become inextricably linked to racism, anti-immigration policy and nationalism. LPF frontman Pim Fortuyn is the best known example of this homonationalism. The LGBTI community and the interests of women matter to right-wing politicians only in order to shift the root cause of problems in our society to people with a migrant background.

We hope to send a strong signal with our Never Heroes actions. We hereby demand that wrongful ‘heroes’ be condemned, and criticize the collective memory of Dutch history, including its perpetuation in museums. We thus join the international decolonial and anti-racist community.

We are organized throughout the Netherlands. You will hear from us.
—