The bersiap controversy: the Rijksmuseum wants to get rid of the word, Indo-Dutch feel insulted

The fact that the Rijksmuseum decided to delete the term bersiap in an exhibition about the Indonesian revolution, made Indo-Dutch to file a police report 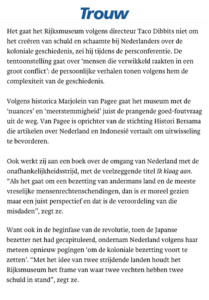 If there were a dictionary for banned historical terms, the word “bersiap” would be in it now. In a press conference on Tuesday, the Rijksmuseum announced that it would avoid this Indonesian term, which translated means ‘get ready’, in the exhibition Revolusi! Indonesia independent, opening next month.

Bersiap is a battle cry that was frequently heard during the first months after Indonesia’s declaration of independence in 1945 and heralded a period of extreme violence by Indonesian militia groups against Indo-Europeans, Moluccans, Dutch and Chinese, especially civilians.

The term has since been used in the Netherlands to indicate the earliest period of the Indonesian revolution. But according to one of the curators of the exhibition, the Indonesian historian Bonnie Triyana, bersiap is also often used in general for violence against the Dutch during the revolution.

As a result, he says, it has a ‘strong racist connotation’. ‘More so because the term ‘bersiap’ always portrays primitive, uncivilized Indonesians as perpetrators of the violence, which is not entirely free from racial hatred. The root of the problem lies in the injustice that colonialism created,’ Triyana writes in NRC.

“Even the victims have to give way to Indonesian propaganda”

The Federation of Dutch Indo people, whose relatives were victims of this violence, is outraged and has filed a police report, said spokesman Micha’el Lentze. “This is nothing more than denying a period when Indonesians indulged in racial persecution, torture and rape,” he said.

He sees the Rijksmuseum’s move as an ‘attempt to write history along different lines’. “Even the victims have to give way to Indonesian propaganda. People have been brutally slaughtered who were guilty of nothing. We are now standing up for our people, while others want to sweep this history under the rug.”

Harm Stevens, curator of history at the Rijksmuseum, says that he does not want to downplay the violence in that period by deleting bersiap. In the exhibition, a separate room is devoted to the early period of the revolution, in which, for example, an Indo-European family who was a victim of violence by Indonesians speaks.

There is also criticism of the Rijksmuseum coming from the political right. For example, Annabel Nanninga of JA21 calls ‘this history-falsifying talk (and of course partly subsidized), downright laughable’. The museum is portrayed by these kinds of critics as a woke institution that want to make Dutch people feel guilty.

According to director Taco Dibbits, the Rijksmuseum is not about creating guilt and shame among the Dutch about colonial history, he said during the press conference. The exhibition is about ‘people who became involved in a major conflict’: according to him, the personal stories show the complexity of history.

According to historian Marjolein van Pagee, the museum avoids the pressing question of right-wrong with the ‘nuances’ and ‘multi-perspectivity ‘. Van Pagee is the founder of the Histori Bersama foundation, which translates articles about the Netherlands and Indonesia to promote exchange.

She is also working on a book about how the Netherlands deals with the Indonesian struggle for independence, with the revealing title ‘Ik klaag aan’ (I am accusing). “When it comes to the occupation of other people’s land and the most horrific human rights violations, there is only one moral perspective and that is the condemnation of those crimes,” she says.

Because even in the initial phase of the revolution, when the Japanese occupier had just capitulated, the Netherlands immediately made new attempts, according to her, ‘to continue the colonial occupation’. “With the idea of ​​two countries in conflict, the Rijksmuseum maintains the frame of ‘where two parties fight, two are to blame’,” she says.

In the same month that the Rijksmuseum exhibition opens, a study will be published on the nature, scope and context of Dutch violence during the war of independence. A group of historians, commissioned by the government, have been working on this for four years.

In the brochure of the research, in which twelve publications are announced, the term bersiap is not avoided. The researchers do not want to comment on the issue at the moment, they will do so when the first studies appear at February 17. One of the twelve books does focuses in particular on the development of the term bersiap in the Netherlands.
—