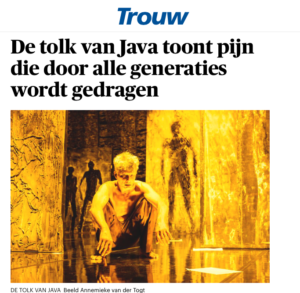 As the theater show “The Interpreter of Java” develops, the ghosts of a violent past become more visible. Not only through the narrative but also visually: panels with images of shadowy figures rise up one by one from the stage floor. The ghosts in the head of the Indies-Dutchman Arto (Martijn Apituley), who wrote in his memoirs about his experiences during the Japanese occupation and his role during the subsequent police actions. The ghosts keeps rattling around too in the head of his son Alan (Benja Bruijning), who in turn tries to understand his traumatic childhood with a tyrannical father. “If he hits you, it is the Marine who takes possession of him,” says his mother (Marie Louise Stheins).

The main theme of Alfred Birney’s novel “De Tolk van Java” (The Interpreter from Java), winner of the Libris Literature Prize 2017, is the relationships within Dutch-Indies families, torn and traumatized by events from a complicated past. Rarely an author went to the bottom of the problem so uncompromisingly, written from the perspective of the Dutch Indies people who came to the Netherlands after a chaotic wartime. From their dilemmas, big questions arise: can you justify what is wrong from a compelling situation? Which side are you on, in a war or in a family dominated by physical violence and psychological terror?

Ignace Cornelissen excellently adjusted Birney’s book into a theater play. The chronology has been put aside, the memoirs of the father  –  which contain graphic and detailed descriptions of executions, street razzias and torture are slowly being presented – building up to a phenomenal “sum total” of all the victims that Arto killed. The cruel father (“Every lesson from an Indo comes with a slap in the face”) and the talkative mother who prefers to pretend ignorance in order not to feel, remain functionally at distance. This places the focus on the searching son, who asks both of them about their motives.

Brilliant is the introduction of grandma (Denise Aznam) from the Dutch East Indies, with long hair that touches the ground, wandering around as the historical conscience. Benja Bruijning impresses with his fine tone of sarcasm, which adds the necessary lightness to the show. Director Olivier Diepenhorst’s style results in an unembellished theater play. There is a lot of room for Birney’s words, sharp as knives, from the mouths of the actors they hit hard. The most beautiful scene is where Diepenhorst allows himself most freedom: when the father – during the war in service of the Dutch Marines torturing “his own people” –  is now subjected to a brutal interrogation by his son. As a spectator you can feel the pain carried through all generations, which will continue if these stories remain untold.

On September 3, 2020, the London-based publishing house ‘Head of Zeus‘ released the hardcover edition of ‘The Interpreter from Java’, translated by David Doherty: