Too often the law is used to sabotage reasonable debate

Blog Law and Administration Declaration
Reporting those people to the police who do not share your view undermines the debate and leads to self-censorship. Three academics draw that conclusion from the Bersiap issue. 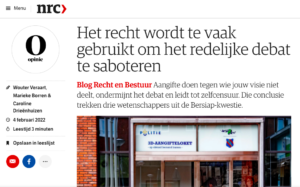 In the controversy surrounding the use of the term ‘Bersiap’, so far no attention has been paid to the instrumental way in which the law is used to sabotage reasonable debate, by radical groups on the sidelines of this turbulent discussion. This legal form of militant activism fits into a broader pattern of attempts to criminalize contributions to public and academic discussions.

The controversy started with an op-ed by historian Bonnie Triyana, the Indonesian guest curator of the exhibition Revolusi! which will soon open in the Rijksmuseum. In it, he argued that the term would not be used in the exhibition, as it does not do justice to the complex period after the Japanese capitulation. The term would give a limited and one-sided Dutch perspective on the events and thus confirm racist stereotypes of Indonesians.

This was the reason for the Dutch Indies Federation (FIN) to report Triyana to the police for insulting [a particular] group. Almost simultaneously, the Rijksmuseum announced that it did not plan to remove the term. Not long afterwards, the Committee of Dutch Honorary Debts (KUKB) announced that they reported the museum to the police for discrimination and group insult, as the term ‘Bersiap’ was going to be used again.

Currently there are police reports about both the use and non-use of the term ‘Bersiap’ in the Rijksmuseum’s exhibition: in both cases they are considered criminal acts. And while it is extremely unlikely that the Public Prosecution Service is going to accept these cases, the reports from these parties reveal a disturbing trend that seems to be intensifying in recent years.

Social processing of the colonial past in general and the Indonesian war of independence in particular takes place through social and academic discussions that sometimes turn into heated debates. History itself also develops in a continuous debate between competing interpretations of historical events. We have also seen this in recent weeks, when historians such as Henk Schulte Nordholt, Remco Raben and Lara Nuberg supported Triyana and academics such as Peter Keppy and the Rijksmuseum criticized Triyana’s position through director Taco Dibbits and curator Harm Stevens.

Taking immediate legal action against people or institutions that do not share your view of history – unless something very special is going on – undermines the preconditions for an open and respectful democratic public debate. Then the right is abused to silence dissenters. The legal charges brought by both the FIN and the KUKB are based on false assumptions: no historian or cultural institution denies or tries to cover up the mass murders committed immediately after the proclamation of the Republic.

But more importantly from the point of view of an open and dynamic debate about the shared past, these frantic attempts to criminalize the other’s point of view result in the debate being hijacked and distorted by people who won’t listen. As a result, those who want to have a reasonable discussion avoid it from now on, not only out of fear of threats, but also because they do not want to get involved in time-consuming and nerve-wracking legal proceedings, through the courts or academic complaints committees. We also know from our own experience how the legalization of substantive contributions to sensitive social discussions among academics and others can lead to self-censorship.

The charges against historian Bonnie Triyana and the Rijksmuseum are no exception. Anyone who conducts research into and speaks out about, in particular, the period surrounding the Indonesian independence struggle from 1945-1950, can invariably count on legal action from various Dutch groups and individuals. In the past year there has been a lot of talk about academic freedom within academia. Less than a year ago, the KNAW (The Royal Netherlands Academy of Arts and Sciences) issued a statement that academics should be able to publish their findings freely, taking into account the principles of academic integrity and those involved in their research.

That freedom and thus the open public debate are under real threat if academic are constantly forced to defend themselves against legal charges and receive little or no support from the institutions in which they work. The charges in this case seem laughable. But they are a symptom of a form of ‘law fare’ that has the potential to undermine reasonable debate and thereby nip in the bud the development of historical knowledge and the collective processing of a traumatic period in Dutch and Indonesian history.
—