The Dutch Apologies are meaningless 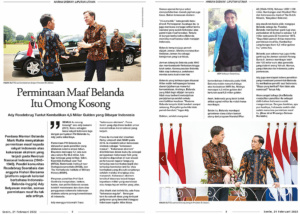 Dutch Prime Minister Mark Rutte apologized to the Indonesian people for the use of extreme violence during the Indonesian National Revolution (1945–1949). Ady Setyawan, the founder of the Roodebrug Soerabaia community and member of Histori Bersama (a multilingual platform about colonial history in Indonesian, Dutch and English) said that all [Dutch] apologies are meaningless.

“This is all meaningless!” Ady stated yesterday (20/2). While most Indonesians are relieved by the statement of the Dutch Prime Minister, Ady has a very different opinion.

The apology of the Dutch PM is based on four years of research. They got a research budget of 4.1 million euros, which is about Rp. 66.6 billion. Three Dutch institutions were involved. Namely, the Royal Institute for the Linguistics, Geography and Ethnology (KITLV),) the NIOD Institute for War Holocaust and Genocide Studies and the Netherlands Institute of Military History (NIMH).

Research leader Prof Gert Oostindie said that Dutch soldiers, judges and politicians collectively tolerated and kept silent about the systematic use of extreme violence during Indonesia’s war of independence.

Ady underlines the use of the term “extreme violence”. The term is being used as a way to cover andnormalize colonial deeds.

The term was coined by Rémy Limpach in his dissertation from NIMH in 2016. He defined extreme violence as “mass violence.” In his book he described “extreme violence” as physical force primarily used outside of regular combat situations against non-combatants (civilian) and against combatants (military or combatant) without arms after they were captured or surrendered. Such extreme violence usually occured without an urgent military necessity or without a clear military purpose.

When using that definition, it means that “regular violence” took place as well. A bomb attack on a village where [Indonesian] freedom fighters hide, is then considered regular violence. In other words: acceptable.

All combat operations that were launched to defend the colony is also considered normal violence. Not extreme violence.

“This is just a trick,” says Ady, the author of the book Kronik Pertempuran Surabaya (Chronicle of the Battle of Surabaya). He read various national news articles that have been fooled by the apology. Many news coverages claimed that the Dutch apologized for having colonized Indonesia. The Netherlands has been colonized by Germany before. The Dutch talk very negatively about the German actions and describe them as atrocities.

The Germans came to the Netherlands in 1940 and bombed and ruined the city of Rotterdam. Because the Dutch troops were not ready to fight, they only managed to defend the country for six days.

The Dutch, who were desperate under Hitler’s control, became increasingly worried about their colonies demanding independence. Surprisingly, the Dutch who did not like to be colonized [by the Germans], did not want to stop colonizing [Indonesia] after the allies turned things around. “Until today Dutch racism still exists. Their mindset towards us never changed,” says Ady.

In fact, in 1949 when they finally accepted that Indonesia was an independent country, the Dutch even demanded a payment for the sovereignty of the Republic of Indonesia. The value was 4.5 billion guilders, while they initially demanded 6.5 billion guilders.

Strangely, Indonesia, which was devastated by the military aggression, had to pay.

Still, Ady cannot understand why the Dutch were so stubborn. In fact, the Netherlands paid compensation toSuriname when the country became independent on November 25, 1975, amounting to 1.5 billion euros. “I cannot accept this apology as sincere. Give back the 4.5 billion guilders that belongs to our country,” Ady said.

Actually, the Netherlands also demanded compensation from Germany after World War II. Germany paid more than 120 billion euros for the genocide of the Jewish people. This is in stark contrast of the extortion in the Indonesian case.

Ady also found out that Indonesian researchers were involved in the Dutch government-sponsored research. “Who were involved? How come we don’t hear from them?” asked Ady.

It would be very problematic when the Netherlands is going to use the research as an excuse based on that Indonesia agreed with it. Thus, apart from the outcome, the impression is made as if Indonesia has accepted the apology.
—

How colored are your archives? – Volkskrant