Winternachten literary festival and the art of decolonization

Former Dutch colonies are the focus at Winternachten in The Hague, one of the Netherlands’ biggest literary festivals. “Again, your excellency, we are in 1939, and just as your parliament expressed expectations that it would take at least another century before Indonesians are ready for independence, I am also voicing my expectations that before the end of the next decade, and most likely after a regrettably bloody independence struggle, I will be sitting at the same table with your Queen to discuss the independence of my country and my people.” 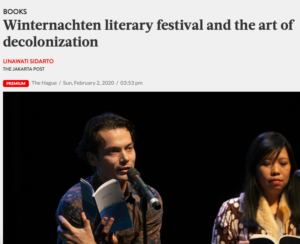 This imaginary letter from Mohammad Hatta, who at the time was jailed in Banda Naira and later became Indonesia’s first vice president, to then-Dutch prime minister Henrikus Colijn, was penned by Dutch author Reggie Baay.⁣ He and eight other writers — all with roots in Indonesia, South Africa, the Dutch Antilles or Surinam — wrote and read out the “letters” written to or from people of these former Dutch colonies. This performance in mid-January was part of the annual Dutch literary festival Winternachten (Winter Nights), which this year celebrated its silver anniversary.⁣
⁣
“In 1995, we organized an arts festival to commemorate Indonesia’s 50th anniversary. We thought it would be a one-time thing,” said Winternachten founder Ton van de Langkruis.⁣ The Netherlands only recognized Indonesia’s independence, proclaimed in August 1945 by Sukarno, in December 1949.⁣ “It always puzzled me why Dutch performing arts did not weave our colonial history into their creations.”⁣ These thoughts resulted in Festival Indië/Indonesië (Dutch East Indies/Indonesia Festival) with 10 days of dance, music, theater, film, art and literature, featuring guests like Rendra and Sitor Situmorang. The last day of that festival was filled with discussions among participating writers, dubbed Indische Winternacht (Dutch East Indies Winter Night).⁣
⁣
“After the festival, a number of writers asked me: Why only limit these literary discussions to one time?” Ton van de Langkruis recalled. “Thus, Winternachten became a regular event as a forum for writers to meet each other and their audience.”⁣ In 1998, the festival expanded from Indonesia to other regions where the Dutch had been present, such as South Africa, the Antilles and Suriname. While this further broadened with literati from countries such as Malaysia, India, Turkey, Iran and Morocco, Indonesia and Indonesians were almost always present.

In January 1999, for example, Winternachten’s theme was Reform in Indonesia in the wake of president Soeharto’s fall from power. The festival welcomed Eka Kurniawan in 2006, his first trip outside of Indonesia, years before he became an international sensation with the English translation of his book Beauty is a Wound in 2015. In addition to writers, it has also invited figures from other disciplines, such as Gadjah Mada University (UGM) historian Bambang Purwanto in 2007 and human rights watch activist Andreas Harsono in 2010.

Writers Unlimited, the foundation responsible for Winternachten, also organizes tours where four writers from four different regions, including from the Netherlands, would go to a country and interact with students. Indonesia is a regular destination, with visits to numerous cities such as Bandung in West Java, Yogyakarta, Bandar Lampung in Lampung and Makassar in South Sulawesi. To mark its silver anniversary this year, Winternachten revisited its first edition’s theme of liberation, decolonization and the Netherlands’ ties to Indonesia, Suriname, the Antilles and South Africa, noting that this also included “decolonizing the mind”.

Around a 100 writers, performers and musicians participated in the festival, including veteran Indonesian journalist and writer Goenawan Mohamad, who was also present at the first Winternachten, as well as newcomer Angelina Enny, who is active in writing and theater in addition to her day job as an accountant in Jakarta. Thousands of people attended the four-day event, spread over 10 locations in The Hague.

In a session about how Indonesia looks at its history, Goenawan said the following when asked about the country’s colonial past: “Our nation has had many traumas. Piles of new traumas sometimes set aside older ones, like colonialism. Maybe this is why we don’t talk as much about that time as the Dutch do.” This was further emphasized by Angelina, who is writing a novel about traumas surrounding mass violence after the failed coup in September 1965, blamed on the Indonesian Communist Party (PKI).

Her novel is inspired by her beloved nanny, who was a victim of the post-1965 tragedy and yet never spoke about it. “She passed away in our house and she was silent about it till the end.” This “silence”, in turn, also confronted Dutch poet, musician and actor Robin Block when he tried to find out more about the younger years of his grandparents in the Dutch East Indies. “It is the elephant in the room; some things are never discussed,” he said. Many Europeans and Eurasians, or Indo, living in the Indonesian archipelago were interned in camps during the Japanese occupation between 1942 and 1945.

After Indonesia proclaimed independence in August 1945, Dutch East-Indies civilians were caught in the midst of the physical and diplomatic war between Indonesia and the Netherlands, which ended in 1949. Between 1945 and the mid-1950s, some 300,000 people left Indonesia for the Netherlands. The legacy of the Dutch East Indies was at the center of a session with prominent Dutch writer Adriaan van Dis, and journalist, poet and musician Ellen Deckwitz, respectively second and third-generation Indisch, meaning that their parents and grandparents were either born or lived in Indonesia when it was under Dutch rule.

Adriaan, born in the Netherlands in 1946 from Dutch parents who felt rooted in Indonesia, grew up with half-siblings who had an Indonesian father. “I look as white as snow, and yet my whole household was Indisch. I wanted to be darker,” van Dis said, recalling his childhood.

Meanwhile, Deckwitz, who was partially brought up by her grandmother, said: “In a way, I inherited this feeling of displacement, of not really feeling at home anywhere.” Their Dutch East Indies background is amply represented in their writing, such as My Fathers War, one of Adriaan’s most successful books, and Higher Physics, Ellen’s book of poems.

Langkruis, who will step down as director after 25 years, hopes that Winternachten will continue to inspire audiences, particularly the younger generation. “Literature does not always mean it has to be on paper but can also be in the form of rap music or multimedia performances, a mixture of on-screen and on stage.” This seems to be working, at least for Artien Utrecht, who has attended almost all the Winternachten since 1995. “Young writers and poets tend to look forward. How do they relate to colonialism today and how do they find their own perspective in it? They often use multimedia, and this gives the festival a fresh infusion,” she said.

Philip Vencken, who spent his childhood in Jakarta in the 1950s, praised Winternachten as a “wonderful way to focus on this very special subject”. He particularly enjoyed the session between Adriaan and Ellen, noting that he could “fully identify” with their stories.
—